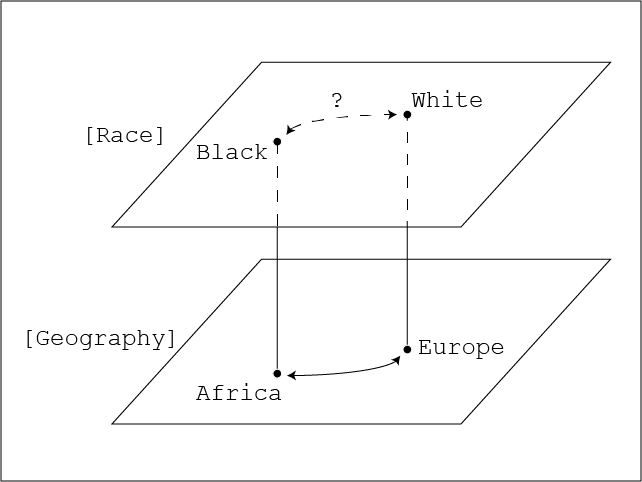 If you can take for grant the equality of the continents Africa and Europe, you can use it to form the equality in race. Your strategy here is to change the perspective from [Race] to [Geography]:

In the new perspective, you are free from your emotion. You don’t have to worry about having fear, bias, heuristics, memory distortions, etc. Africa cannot hurt your pride; Europe cannot enslave you. Your mind is sharp and rational in this perspective.

So by exploring the relationship between the two continents as if you are a geographer, suddenly a wealthy material to prime race equality back to the [race] perspective is available in your hand. The drawback, of course, is that to have the perspective of a geographer you should study geography seriously. But the results are worth the effort: you will feel something miracle every time you re-read your sentence.

Unfortunately I don’t have a decent knowledge on geography to illustrate this. But here is my take on the analogy between anger and turbulent flow, using as a closing words for an article about borderline personality disorder:

When a smoke begins to smolder, it first maintains its stability. But with just a little turbulence, the smoke becomes an uncontrollable chaos. Swirling currents will be generated to radiate heat outwardly, rolling together and causing more and more energy to be lost. And after the energy is completely depleted, it will dissolve into the surroundings and leave not even a single mark behind.

Superficially, that prose is about a physical phenomenon only, with physics jargon like stability, turbulent, chaos, current, heat, energy. But this is an analogy for non-physicists; the readers don’t need to understand what they mean. So in their perspective, what does this look like?

These gaps must be filled to make sense of the world; unconsciously the readers will projected themselves into it; what is filled depend on their background. For example:

When my mom begins her anger, she first maintains her calm.

In other words, the readers see themselves in there.

This very theory is built with this mindset:­

But there are many physical characteristics a pendulum has (wave, Fourier transform, chaotic movement, etc), and it took me a while to realize the feature being compared with is its visual display, and that is what we should focus on. The visual display comes from its velocity, and one cannot study the pendulum’s velocity without using complex number. This brings me to another perspective:­

This is how I found the Riemann sphere, and by that, understood the moon analogy.

Pendulum and complex number are faded in [Taoism] and [physics] perspectives, because although they are necessary at the moment they come up, they are mentioned fleetingly in the context. When the authors have something else occupying their minds, then these concepts are just the tools, not the goals. They don’t think about them as how they really are, and they are not mindful in what they say.

When would analogy reasoning lead to fallacy, and when would it be the fuel and fire for thinking? Take a look at the watchmaker analogy:

Step 1 and 2 are fine, but step 3 indicates that the analogy-maker hasn’t escaped the [universe] perspective, and only find a way to justify their existing conclusion. Because of that, although step 2 is not wrong, it’s a way to cherrypick the data. If it were me, after coming up the first step, I would find a watchmaker and ask: “why do you love making watches?” His answer would be the perfect closing words for my essay about universe.

This time, the analogy makes more sense because the step 3 lifts a huge burden from the analogy maker. So while a logician would recoil in horror when hearing an analogy, a therapist would see it as a light house guiding the patient getting out of their learned helplessness. Because ultimately analogy is a way to cherrypick data, the validity of an analogy is not on its logicality, but on its ability to make the someone relieved. This is both subjective and objective at the same time.

So I think there are three questions to check before relying on analogy reasoning:

In other words, would the analogy make you feel like having a fresh perspective to solve a hard problem? If yes, then congratulation, the analogy is concrete.

Analogies that are common and stable in the culture indicate that they satisfy the last requirement. A large part of them can be found in idioms and mysticism, especially nature mysticism. Dreams can also be such source, because, you know, the mind is like an iceberg.­