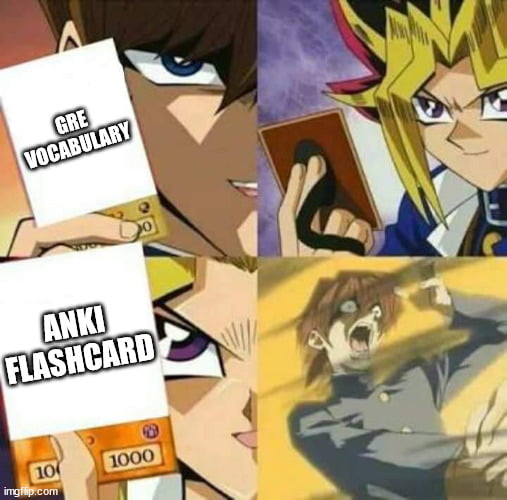 Well, I kind of obsess with being efficient. Most of the time, people only concentrate on the content, but are not aware of how that content gets digested by others. The worst example that I know of that bad displayed information (not missing information) can lead to a disaster is the case of the Columbia shuttle: it blown up in the air because of a bad PowerPoint slide. You see, a good design is not only eliminate hindrances of your mind flow, but also can save the world.

OK, now back to the point. I’m studying GRE by using Anki, and while there are numerous already built decks, the process of my learning was not satisfy me (or was I expecting too high?). There were a lot of cards that becoming leeches (a leech card is a card that I keep forgetting, and will be buried automatically by Anki). This is a waste of time, and a waste of effort. As a consequence, my Verbal score didn’t improve.

Note that I’m not saying that learning these decks didn’t help me, it just didn’t meet my expectation. I do have learnt a lot of useful words, and since then I learn English with a different eye: I don’t have to suffering learning it any more, but exploring it with joyful.

OK, now back to the point. Many people will say: well, that’s the limit of being a foreigner, there is nothing I can do. I don’t think it’s impossible. After hunting high and low for the best deck, I found that the Verbal Workout GRE 4th edition (شخصی سازی شده) had a lot of built-in IPAs, images and sounds. And yes, it has Persian meaning in each card. It is the good deck to start, a very good one, but not the good deck to learn (except Persian people). So I wrote a Python script, extracted the data, crawled more data and redesigned the deck. Here is the final result:

The more relevant information you have, the easier you remember it. This is how the brain works.

There is not much I need to say, and I’ll try to keep it short:

Some more insights about the design:

Good luck with your GRE test 😀

PS: for Vietnamese learners, there is a surprise for you at the bottom of every card. Check it out 😉

6 thoughts on “A highly efficient GRE Anki deck to learn”